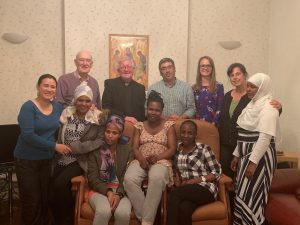 On his arrival, the Archbishop met with volunteers and staff. They spoke about the project and the support they give to the women. He then shared a meal with project staff, volunteers and the women themselves.

Past and present guests spent all day getting ready to welcome the Archbishop – from buying the food fresh that morning to preparing it ready for the evening. Everyone sat together and enjoyed sharing the wonderfully cooked food from the women’s home countries.

Afterwards, the women invited Archbishop Bernard to join them in the sitting room, which they had prepared with incense, and served Eritrean coffee and cakes. The guests had dried the coffee themselves and prepared it in the traditional way for their visitors.

The Archbishop presented each woman with an official signed photo of Pope Francis, of which he had only received a small number when he met his Holiness on a visit to Rome.

The visit was an enjoyable occasion, offering a wonderful opportunity for the women and Archbishop Bernard to spend time together.

Fatima House is a partnership project between Father Hudson’s Care, the Columban Missionaries, Caritas Archdiocese of Birmingham, the St Vincent de Paul Society, and a local Catholic parish. It offers safe shelter to female asylum seekers who would otherwise be destitute and homeless. Women are referred to the project by a number of specialist agencies, which support the women with their asylum claims.