On Friday 15th of June, Fatima House opened its doors to welcome friends and supporters. The occasion marked the second anniversary of this project, which offers sanctuary to asylum seekers facing destitution. More than forty visitors enjoyed the warm welcome offered by volunteers and residents who showed hospitality by preparing traditional food and cakes from the countries where they are from. 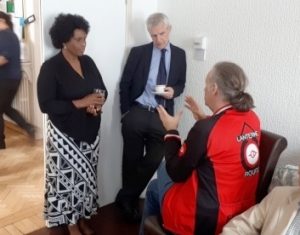 Among visitors we had representatives from the partnering organisations – Father Hudson’s Care and Columban Missionaries – as well as parishioners, members of SVP, local clergy, representatives from referral agencies on other refugee organisations. The celebration coincided with the end of Ramadan, so those who stayed till the very end  enjoyed an Eritrean Eid meal prepared by the residents.

On the day as the project Co-ordinator, I took the opportunity to thank God for the good will showed by so many people which has allowed the project to serve effectively the most marginalised and vulnerable group of asylum seekers. On behalf of the 24 women we have been able to host at Fatima over the past two years, I thanked the ongoing support offered by the Archdiocese of Birmingham and other Catholic organisations in the city.

As we celebrate Refugee Week, the second anniversary of Fatima House reminds us of the challenges faced by all refugees in trying to reach safety and of the shortfalls and injustices generated by the country’s Immigration policies. The work of Fatima House in offering sanctuary is a concrete gesture of Christian solidarity with millions of migrants worldwide whose dignity and humanity are denied by national immigration systems driven by selfishness and greed.

As a symbol of hope, Fatima House’s partner organisations have recently committed to continue support the project for the next three years. With the same hope, we pray for the necessary changes which will make of destitution among asylum seekers a thing of the past in the near future.

If you would like to know more or visit the project, please send me an email to fatimahouse@fatherhudsons.org.uk.