The parish of Our Lady of the Angels and St Peter in Chains is holding From Conflict to Communion, a service of reflection and reconciliation on Sunday 29 October at 6:30pm.

The service will commemorate the 500th anniversary of the beginning of the Reformation. Led by Bishop David McGough, Bishop Geoff Annas and Reverend Peter Barber, it will celebrate the mutual understanding, co-operation and respect Catholic and Lutheran Christians now share. 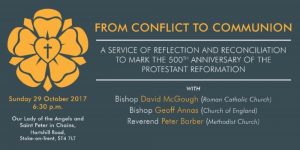 A joint Catholic and Lutheran document, From Conflict to Communion, is also available to download from the Vatican website or the Lutheran church.

The document presents the 500th anniversary of the Protestant Reformation as an opportunity for deeper communion between Roman Catholics and Lutherans and for celebration of their common witness to the gospel of Jesus Christ. It describes a route “from conflict to communion” and assesses how Lutherans and Catholics could jointly commemorate the Reformation’s beginnings with elements of both repentance and celebration.

To mark the anniversary, 140 people joined midlands Church leaders in a walk of friendship on 23 September. The 18-mile St Chad Pilgrimage connected the Roman Catholic Cathedral Church of St Chad, Birmingham, and the Anglican Cathedral of St Mary and St Chad in Lichfield. The walk followed canal tow-paths, cycle routes and country lanes, taking over nine hours to complete.

Lichfield Diocese have produced the following short video of the pilgrimage.