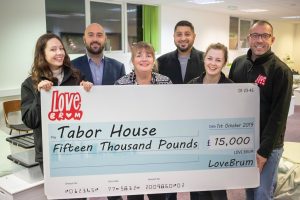 omeless people in Birmingham are set to benefit from a £15,000 grant to Tabor House thanks to LoveBrum. The shelter was announced as the first recipient of LoveBrum’s Community Impact Fund, in a bid to tackle homelessness in the city.

When Tabor House first opened its doors in Digbeth, it became Birmingham’s only permanent night shelter, offering safety, support, warmth and encouragement to people experiencing homelessness. Tabor House helps people to access the additional support required to bring a person out of the lifestyle of the street, back into living independently and being able to manage their own lives.

In the year since it opened, 25 people have stayed at Tabor House, with 20 of them moving on to their own independent accommodation as a result of the unique mentoring and support package Tabor House offers to Birmingham’s rough sleepers.

Recent statistics show that an estimated 726 homeless people died in England and Wales in 2018, 23 of whom were in Birmingham, the highest number recorded by any local authority in the country. With this number likely to increase, local charity, LoveBrum is supporting places like Tabor House that are working hard to make homelessness history.

The unique project has a small staff team of one full-time manager and two part time workers, supported by a large team of volunteers. Volunteers provide mentoring and befriending. Their enthusiasm is key to the success of the project, which is why the LoveBrum funding will be spent to employ a volunteer co-ordinator for an entire year, helping to bring another 30 people off the streets and get back on their feet. The remaining funding will cover the cost of a hot meal for Tabor House’s guests for three months.

Paul Mitchell, Executive Director of LoveBrum, said: “LoveBrum’s Community Impact Fund has allowed us to grow the charity’s work across the city and make a significant difference to one project which, in turn, will impact the lives of many.

“More needs to be done to tackle homelessness in Birmingham, which is why we made the decision to support this incredible project, so they can continue to change people’s lives.”

Sharon Fear, Project Manager at Tabor House, said: “Tabor House is absolutely thrilled to have been awarded LoveBrum’s first ever Community Impact Fund. The money will make a huge difference to the work we will be able to do.

“The volunteer co-ordinator role is crucial in the running of Tabor House, a project predominantly run by volunteers and we are really looking forward to working with LoveBrum.”

LoveBrum supports projects across Birmingham that are often volunteer-led and that deliver real change. The Community Impact Fund launched in May 2019. The charity aims to profile around 40 causes per year. These projects are promoted as part of a monthly vote, where members find out about a cause every week and vote for their favourite at the end of the month. The monthly voting process puts the spotlight on individual projects at the start of each week, with LoveBrum members then having the opportunity during the final week to vote for the cause that they deem most deserving.

To find out more about LoveBrum and the work they do in the local community, visit lovebrum.org.uk.

Tabor House is Birmingham’s only permanent night shelter for people experiencing homelessness. The project invites individuals into a safe and provides mentoring support to enable them to transition into the next stage of their life. The project welcomes men, women, individuals with dogs, individuals who can claim benefits and individuals with no recourse to public funds. This often involves securing employment and independent accommodation.

It is a partnership project between Father Hudson’s Care, Caritas Archdiocese of Birmingham, local business people and philanthropists, individuals with local interest and concern in rough sleeping in Birmingham, and St Anne’s parish.