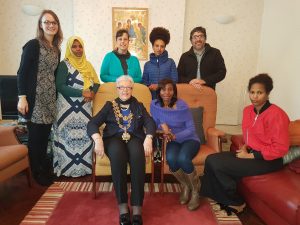 Sitting in a quiet living room in Birmingham, sharing tea and cake, four women spoke about their journeys to get to that point, fleeing their countries of origin and seeking refuge, alone, in a foreign land. Such was the scene as Councillor Anne Underwood, Lord Mayor of Birmingham, visited Fatima House in January. Here she met some of the women currently staying at the house, which offers safe shelter to female asylum seekers who would otherwise be destitute and homeless. The women spoke to the Mayor about their experiences and their countries of origin, offering a first-hand insight into what they have encountered along the way and the issues they continue to face here in Britain.

After refreshments, the group gave the Mayor a tour of the nine-bedroomed house. Cllr Underwood presented her official memento card to each woman as a gesture of thanks and solidarity.

The Mayor plans to share the experience of her Fatima House visit and the issues faced by lone destitute female asylum seekers with others. 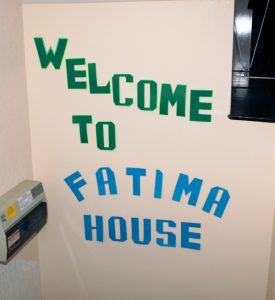 Jo Watters, who is Head of Community Projects for Father Hudson’s Care, said, “We were all really pleased that the Lord Mayor took the time to visit a small project which is reaching out and providing food, resources, warmth and shelter to women who have nowhere else to turn.”

Fatima House is reliant on donations and is in particular need of non-perishable food, toiletries and household essentials. If you would like to donate, please take goods to Father Hudson’s Care, St George’s House, Gerards Way, Coleshill, Birmingham B46 3FG during office hours, or make a financial donation online at www.justgiving.com/campaigns/charity/fatherhudson/fatimahouse. Thank you.