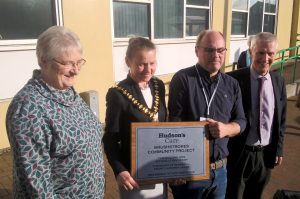 The new building, on Smethwick High Street, places Brushstrokes right in the heart of the community that it serves, enabling it better to support people at their time of need. As the project grew to meet increasing needs, it became necessary to move to bigger and more accessible premises.

With improved facilities and a visible shopfront, the new centre will transform the support Brushstrokes can offer to migrants and the hidden poor in Sandwell and West Birmingham. Volunteers, beneficiaries, funders, representatives from the partner organisations, and others, joined Cllr Jaron for the launch event, which marks a significant development for the project. 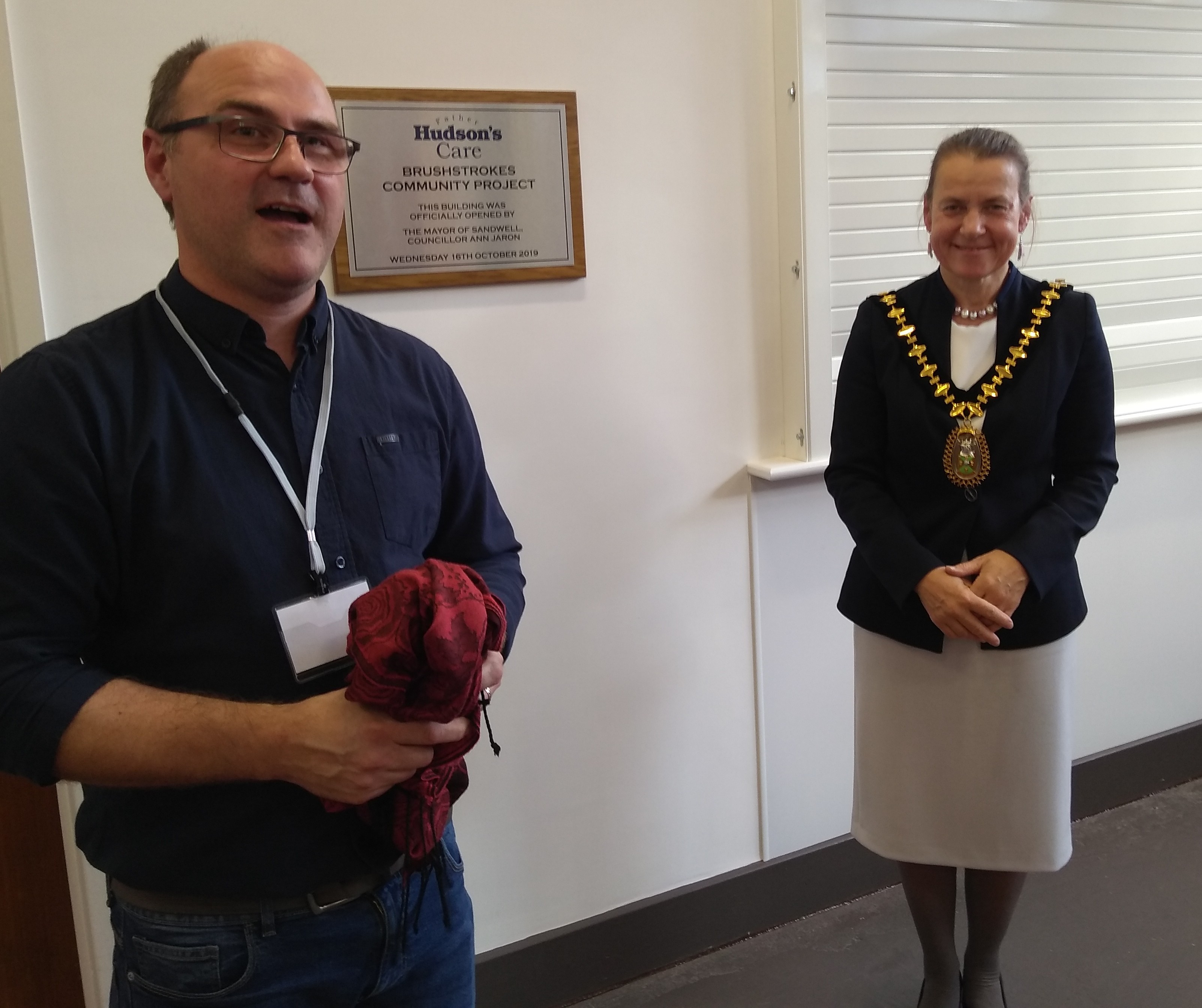 Guests enjoyed a delicious buffet prepared in Brushstrokes’ brand new kitchen, and Cllr Jaron unveiled a plaque. Many of the people gathered spoke eloquently about the benefits that the new centre will bring to the people who use it.

Andy Quinn, Chief Executive of Father Hudson’s Care, compared the launch of Brushstrokes’ new building with the launch of a ship. This launch, however, comes at the end of a long and difficult journey, and Andy paid tribute to Peter Deeley and Andrew Brazier of Deeley Group, for supporting and project managing the move, and to the Sisters of Our Lady of Charity of the Good Shepherd, represented by Sisters Carmel, Helen and Nuala, for enabling it.

Yet this journey was as nothing compared to the voyages, often on ships and boats, that some of the migrants who rely on Brushstrokes were forced to make. Andy expressed the hope that, just as Jesus calmed the storm, Brushstrokes will continue to be a place of calm and peace for people on their journey.

Andy credited Harborne Parish Lands and other Trusts, such as Allchurches Trust, who have supported Brushstrokes financially. He thanked Sandwell Borough Council for working closely with Brushstrokes and the Lord Mayor, Cllr Ann Jaron, for choosing Brushstrokes as one of her Mayor’s Charities of the Year. He thanked Dave Newall and his team, who run Brushstrokes on a daily basis, Sr Margaret Walsh of the Infant Jesus Sisters who founded the project and who will next week be honoured by Newman University for her work with migrants, and Fr Damian Ozokwere CSSp, parish priest at St Philip Neri Catholic Church, for his church’s support over the years. 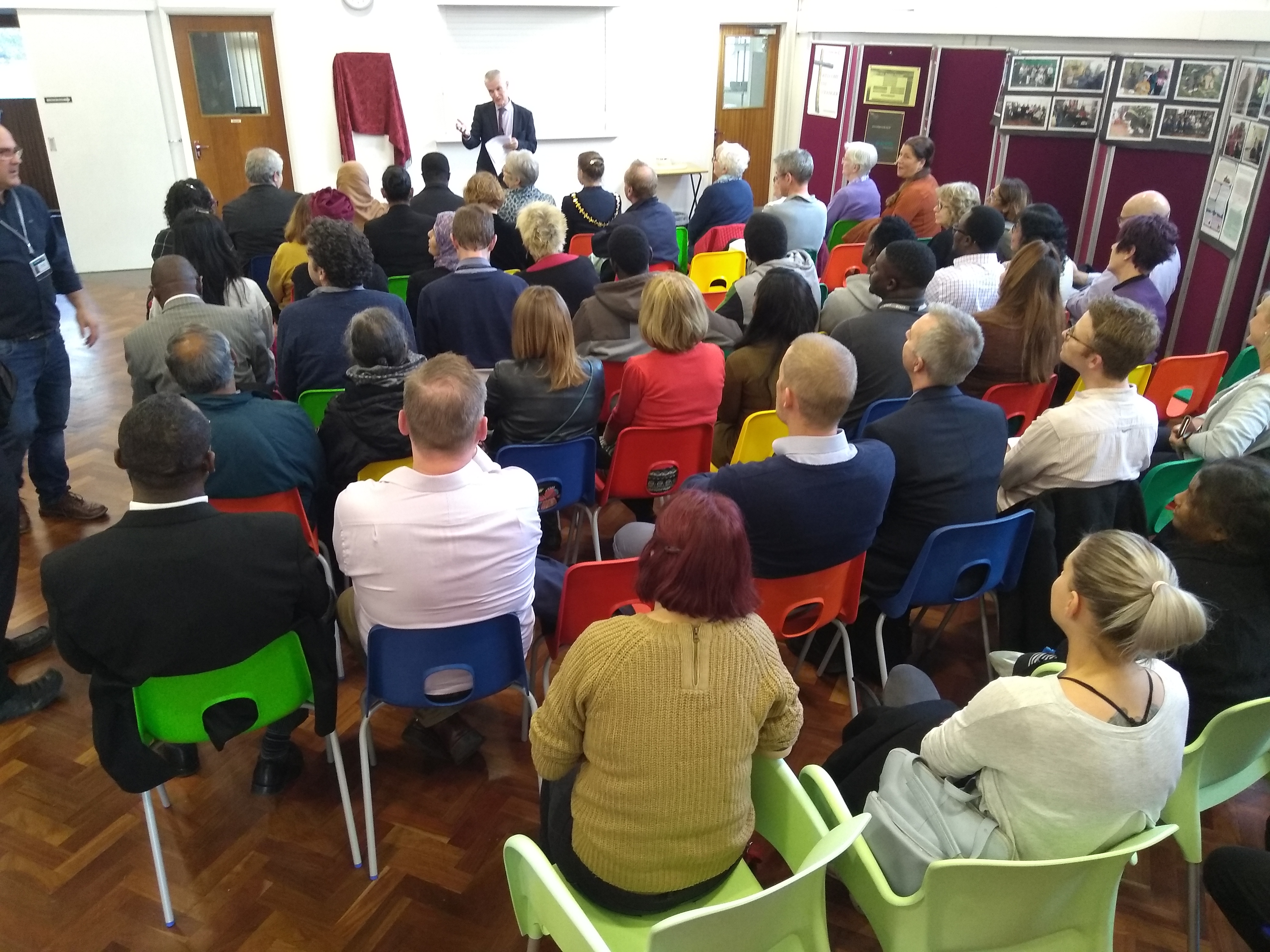 A number of other corporate partners, Trusts and grant makers have enabled the move to the new centre. The National Lottery Awards for all was a major contributor towards kitchen equipment for the new community café. Technology firm SCC donated equipment that already proving invaluable. Brushstrokes also received funding towards equipment for the kitchen from Caritas Archdiocese of Birmingham – one of two final payments from funds collected for refugees and migrants by parishes across the Archdiocese during the Year of Mercy. Many others have played a crucial part in enabling the move to take place, and Brushstrokes is grateful to all those who have given support.

Dave Newall praised the new building, but while the bricks and mortar are crucial, more important is the welcome provided by staff and volunteers for the people Brushstrokes supports. Brushstrokes provides food and resources for people in need, a community café to bring people together, English language classes, a work club to help get people into employment, empowerment and advocacy, and asylum guides helping migrants on their journey to settlement.

Dave highlighted working together in partnership with other organisations, which brings greater influence, improved learning and better results. He also remembered the inspiration behind Brushstrokes that, in the words of Blessed Nicolas Barré, “We must be in the hands of God like a brush in the hands of the painter.” Dave said that Brushstrokes today paints a picture of integration in Sandwell.

Next to speak was Atyaf Sultan, a volunteer asylum guide who works to share her experience with others. Originally from Iraq, Atyaf had a long struggle with the asylum process before eventually winning the right to remain in the United Kingdom.

She spoke movingly about how Brushstrokes had helped her through every step, making her feel at home and support her to move into new accommodation when her status changed.

Horani Othman then spoke. A pharmacist from Syria, he had to leave his country in 2012 due to the conflict there. After arriving in England, the Home Office placed him in Sandwell where G4S gave him and his family just £5 per day to live on. Brushstrokes helped him with food and resources, and provided English classes. He is now studying IELTS, the advanced English course that will – hopefully – allow him to practice as a pharmacist in this country. He is also supporting others as a volunteer. He ended by asking us to pray for the people of Syria, where fighting has flared up once again.

The Lord Mayor of Sandwell, Cllr Ann Jaron, echoed Horani’s words and talked of her shame that some of the weapons used in the fighting in Syria were made here in the West Midlands. The daughter of wartime migrants from Poland, Cllr Jaron spoke of her parents’ welcome in the United Kingdom. She is proud of the Council’s partnership working with Brushstrokes, and knew that it would do more were the funds available. While some people in Sandwell are concerned about migration, she stressed that the majority in her borough were welcoming. The kindness of strangers, she said, goes a long way.

Brushstrokes is involved in early action, to help prevent vulnerable people falling into crisis. It supports people with finding accommodation, employment and training. The project also runs English classes for people who are qualified medical practitioners, supporting them to meet high academic requirements to return to their profession in the United Kingdom.

To find out more about Brushstrokes and how to support their work, visit www.brushstrokessandwell.org.uk.