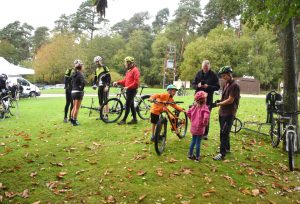 On 1 October, over 200 cyclists and walkers gathered at Cannock Chase for Chase the Cake, an event raising money for Birmingham’s new homeless shelter, Tabor House.

Despite the drizzly, grey weather and the early start, there was a sunny atmosphere throughout the event at the Staffordshire beauty spot. Men, women and children of all ages challenged themselves to complete one of five possible routes, targeted at all levels of fitness and ability. 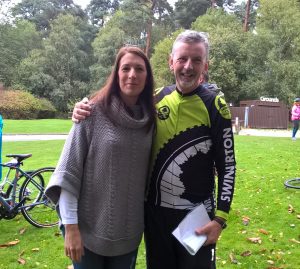 Father Michael White of Sacred Heart in Tamworth led a Mass before the event in which he spoke about Tabor House and the exponential rise in homelessness in Birmingham over the last five years. He talked about the difference Tabor House will make to vulnerable people experiencing homelessness in Birmingham, offering not just a bed, but the support to move on from the streets.

With several routes, there was something for everyone. Walkers took in a five mile woodland walk, while those wanting a gentle ride enjoyed a five mile off road cycle. The more adventurous challenged themselves to a 20 mile off-road route, which offered a scenic tour of the beautiful Cannock Chase. Father Michael reported that he spotted a magnificent stag on his ride! And for those wanting a longer ride, there was a 33 mile and gruelling 66 mile route along the surrounding country lanes.

All the routes were a great opportunity to take in the sights and have fun while helping a worthy cause. And whatever level people participated at, they were cheered along and rewarded with a slice (or two!) of homemade cake, all donated by event organisers, Swinnerton Cycles. 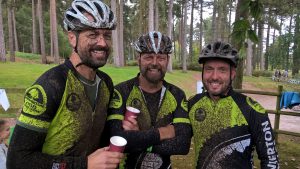 Thanks to wet weather the day before, mud played a big part in the day with the off-road riders coming back covered from head to toe. They didn’t seem to mind though, laughing and joking as they collected their baked reward.

Although the final figures are yet to be tallied, early indicators show the event has raised over £4,500 for Tabor House.

The event wouldn’t have been possible without the committed support of Swinnerton Cycles. They made all arrangements for the day, registered participants, served drinks and baked the all-important cake. As well as cake, they provided a two course meal for the hungry: hot Staffordshire Oatcakes and melted cheese, followed by apple crumble and custard – well worth the miles!

Father Michael said, “I’d like to thank you all for doing the ride. And especially the organisers, Swinnerton Forest Centre at the Chase. They and their volunteers worked so hard to put on an incredibly successful event, raising almost £5,000 towards the set-up and first year’s running costs of Tabor House. It was a really enjoyable event that got some people back riding their bike after years of it being left abandoned in the shed. People loved the fact that they were taking part for such a worthy cause and in such a beautiful area. In fact, it’s all been so positive people are looking to get their names down for next year already!” 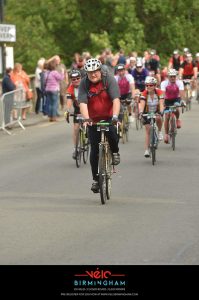 Those who took part in Chase the Cake weren’t the only ones geared up for a challenge. Fr Roger Peck from the Parish of Our Lady & St Huberts took part in the first ever Birmingham Velo – a demanding 100 mile ride around Birmingham and surrounding areas. He raised over £1,000 in aid of Tabor House. This fantastic amount will make a huge difference to the people staying at Tabor House.

Tabor House is a partnership project between the Catholic Archdiocese of Birmingham, Father Hudson’s Care, Housing Justice, corporate philanthropists, the Birmingham Rough Sleepers Team, Midland Heart and Irish in Birmingham. It aims to address the exponential rise in homelessness over the last five years in Birmingham.

As Birmingham’s only permanent night shelter, it offers safety, support, warmth and encouragement to people without the basics and necessities of life. It welcomed its first guests in September, ahead of its official opening on 10 October, to coincide with World Homeless Day.