This project provides short-term accommodation specifically to female asylum seekers who are destitute and are in the process of a renewed asylum claim.

Fatima House is a collaborative project between a local parish, Father Hudson’s Care, the Columban Missionaries and the Archdiocese of Birmingham.

The SVP members came with the offer of providing financial support for the eight women now in residence at the house. Due to their precarious situation, sourcing their own income is virtually impossible, so any support from local churches and associated groups is warmly welcomed. 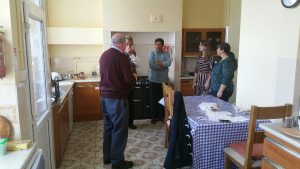 During the visit the Warwick District members were able to see for themselves the impressive progress the Columban Missionaries, Father Hudson’s Care and the Diocese had made in preparing the under-used Presbytery house into a nine room hostel suitable for single women.

Well-appointed rooms, a spacious kitchen and common room all under the reassuring management of the Columban Missionaries – Mauricio and Natalie Silva. The plan is to encourage other Birmingham based SVP Councils to follow suit and support these women through this uncertain and worrying phase of their lives.