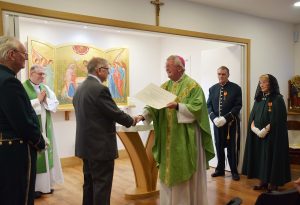 Tony Broom, who recently retired from Father Hudson’s board of trustees, has been honoured by Pope Francis for his years of service to the Church.

On Sunday 15 September, Tony was joined by family, friends, former and current trustees, Father Hudson’s staff and old boys to celebrate his investiture as a Knight Commander of the Order of St Gregory the Great.

The Order of St Gregory is the fourth highest papal award. It is given in recognition of a person’s service to the Holy See and the Roman Catholic Church and the examples they set in their communities. Tony, who was already a Knight of St Gregory, was promoted to Knight Commander for his work with Father Hudson’s Care, Newman University and Oscott Seminary, among others.

Kevin Caffrey, Chair of Father Hudson’s Board, welcomed everyone to the event on behalf of all at Father Hudson’s Care. He said, “Tony has given tremendous service as Vice Chair and lots of other important roles at Father Hudson’s as well as voluntary activities across the Archdiocese. We truly are grateful to you.” 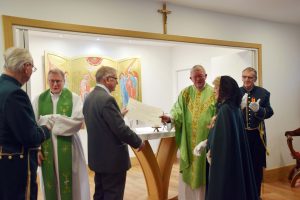 Archbishop Bernard echoed Kevin’s words, thanking all for attending and expressing gratitude that other knights and dames of St Gregory had joined them.

He went on to say how unusual it was to hold a Sunday Mass at St Philomena’s Chapel, located in Father Hudson’s offices, but that he was pleased to do so in the beautiful chapel that Tony helped bring into being. It was during Tony’s tenure that major redevelopments took place at Father Hudson’s Care, and the board wanted to ensure there was always a chapel at the heart of the place. Archbishop Bernard said it serves as a reminder that “the Lord is always with us in all we do at Father Hudson’s Care”.

The service was one of thanks, with readings and prayers given by Tony’s family. The parables they read spoke of things that were lost but restored. Archbishop Bernard said they reassure us that no-one is lost forever. He said, “There is room for everyone in the house of our Lord, a fact that inspires the work of everyone at Father Hudson’s. Father Hudson’s staff take the initiative every day to reach out to people in need. All services seek to restore something that has been lost; something that makes life a little more complete.”

During his 22 years as a Trustee of Father Hudson’s Care, Tony helped shape and guide the work of the charity. As well as holding the position of Vice Chair of the Board, he chaired the Finance, Land and Support Services Committee and the Investment Committee, bringing important financial expertise to those roles. He also worked in other areas of the organisation, providing invaluable guidance to all areas of work. 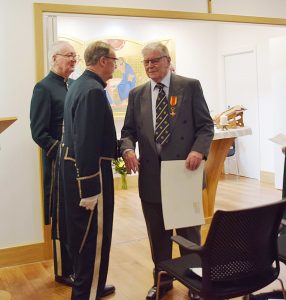 Fellow Knights Tony Flanagan, Michael Hodgetts and Dame Monica Hynes, also of the Order of St Gregory, flanked Tony during the investiture ceremony, when Archbishop Bernard presented his award. Afterwards, Tony said how thankful he was to all present, including musicians Jo and Chris, the concelebrants, the readers and to Bev Smith and Noel Stubbs who organised the Mass.

He said, “I’d like to particularly thank Kevin for putting up with me for so many years, to the Trustees who have travelled so far to join us today, and to my family for being here with me. Thanks to His Grace for putting my name forward and for coming here today and installing me as Knight Commander. I am extremely pleased and honoured.”